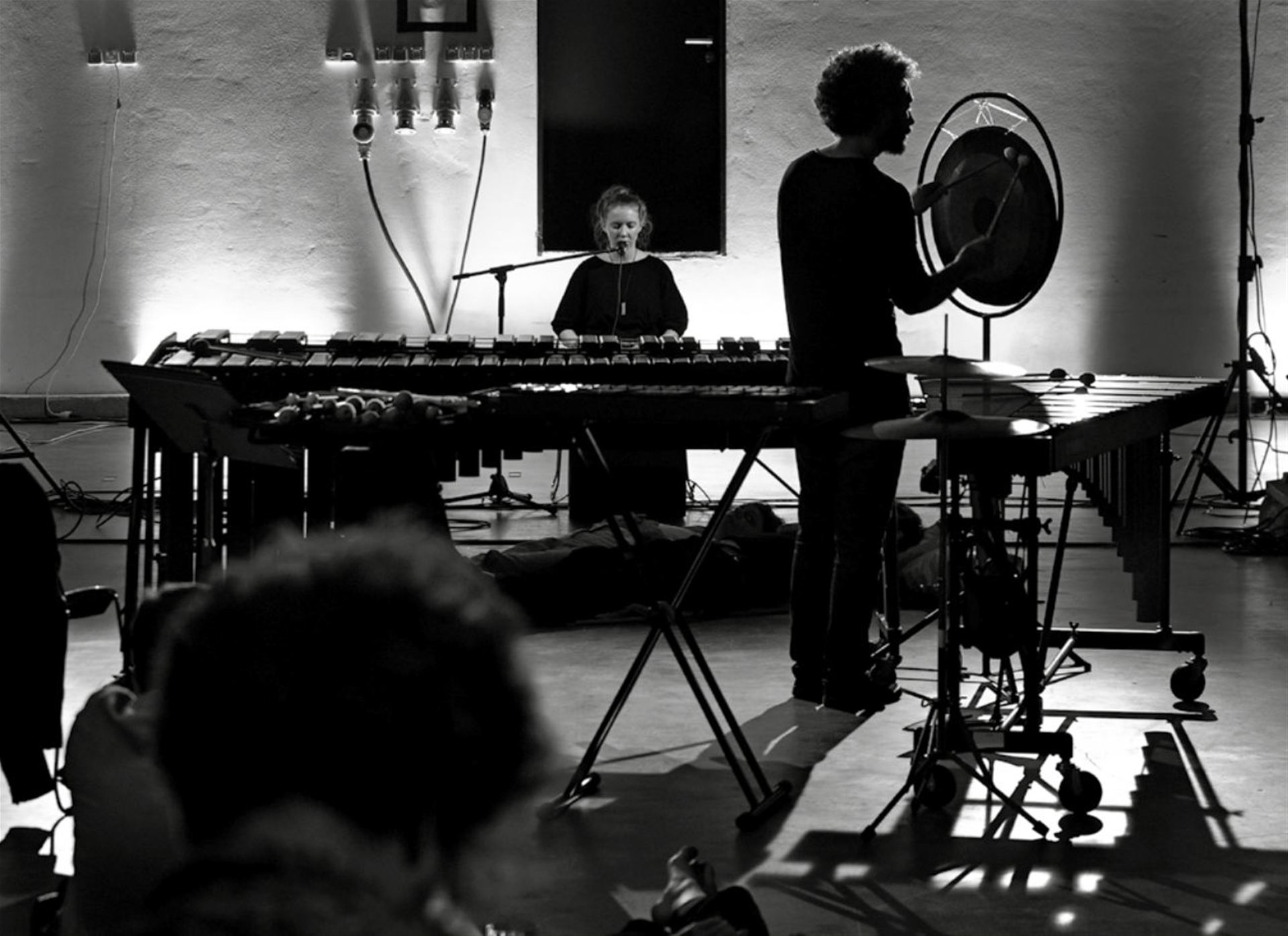 Karlheinz Stockhausen’s Aus den Sieben Tagen (March 1968) is a reaction to the global and personal crises that took place in the period of its composition. The music could be called 'intuitive,' in the sense that it was created primarily on the basis of intuition, rather than the technique of its performers, and is a felt, natural attempt to solve psychological difficulties and challenges. In view of the events of 2020-21, it's fair to say that the piece is once again particularly relevant, dealing as it does with themes such as insufficient social contact, uncertainty, and the fragility of life and its values.

Aus den Sieben Tagen departs from traditional expectations of a concert: audience members are encouraged to move around during the performance, to be aware of their surroundings, to walk or even lie down, to think. They're surrounded by the musicians, and so don't need to focus on a stage,but can immerse themselves in a world of sound and light, as the details in the architecture around them are emphasised, adding another layer to the music.

With an eclectic and generally unclassified taste in music, bass clarinetist Gareth Davis’ recordings, projects and performances span contemporary classical, free improvisation and orchestral music through to rock, noise and electronica. Collaborations have included the premiering of new written pieces by composers such as Bernhard Lang, Peter Ablinger, Toshio Hosokawa and Jonathan Harvey, performances with groups and performers ranging from the Neue Vocalsolisten and Arditti Quartet through to improvisers Elliott Sharp and Frances Marie Uitti, electronic artists Robin Rimbaud and Merzbow and multimedia work with artists including Christian Marclay and Peter Greenaway.

Roland was born in Zug, Switzerland. He studied the trombone and composition at Musikhochschule Graz with Erich Kleinschuster and Georg Friedrich Haas, at Scuola di Musica di Fiesole Florence ( with Vinko Globokar). As a trombonist he specializes in the performance of contemporary music and improvisation/jazz. He has given concerts throughout Europe, America and Asia. He has worked with performers including Anthony Braxton, Miles Davis, Pièrre Favre, George Gruntz and Quincy Jones and composers such as Peter Ablinger, Maria de Alvear, John Cage, Alvin Lucier and Christian Wolff.

Dario Calderone studied double bass with Massimo Giorgi, Franco Petracchi and was one of the few pupils of Stefano Scodanibbio. For almost 20 years he has been an advocate of new music, having performed hundreds of new compositions for solo instrument, chamber music and ensemble in the major festivals of the world. His most interesting solo projects involve a rendering of the famous Voyage that never ends of Stefano Scodanibbio, a strict collaboration with Giorgio Netti on UR, 2 rites for solo double bass, and a specific research in micro-amplification for the live realization of his own compositions for double bass. From 2009 to 2019 has been the bass player of the Nieuw Ensemble in Amsterdam. He is member of Nieuw Amsterdams Peil, and of MAZE, an ensemble for exploratory music based in Amsterdam, dealing with radical experimentations, medias, interactive scores and conceptual composition.

Tomas Järmyr lives in Trondheim, Norway where, since 2017 he has been a member of Motorpsycho, an internationally acclaimed, award winning band that has been, and still is, a driving force in Norwegian and European alternative rock music since 1989. Before Motorpsycho he was drummer for the Italian jazz/metal band Zu. With one foot in rock/metal and the other in jazz/improv, Järmyr’s drumming combines wild creativity with extreme energy and presence. He has a plethora of projects that defy categorising; but operate within a vast range of genres from free jazz through metal to hardcore and electronica.

Scanner (British artist Robin Rimbaud) traverses the experimental terrain between sound and space connecting a bewilderingly diverse array of genres. Since 1991 he has been intensely active in sonic art, producing concerts, installations and recordings, to date scoring 75 contemporary dance productions, including works for the London Royal Ballet and Merce Cunningham. Committed to working with cutting edge practitioners he collaborated with Bryan Ferry, Wayne MacGregor, Mike Kelley, Torres, Michael Nyman, Steve McQueen, Laurie Anderson, and Hussein Chalayan, amongst many others.

Markéta Schaffartzik is a student of the University of Ostrava (CZ) and also studies at the Karol Szymanowski Academy of Music in Katowice (PL). She also works as a voice therapist in the phoniatric outpatient department of the University Hospital Ostrava, where she is involved in research activities in the field of vocology, glotography and voice acoustics. She regularly performs at festivals such as Ostrava Days, NODO (New Opera Days Ostrava), Hudební současnost and others. She cooperates externally with the National Moravian-Silesian Theatre and the Silesian Theatre in Opava.

After completing her Bachelor’s Degree at JAMU, she began studying light design at the studio of Pavla Beranová and Vladimír Burian, providing her with opportunities to take part in projects organised by many major contemporary art figures both from the Czech Republic and abroad, learning valuable lessons along the way. Currently she is mostly active in the Czech Republic, focusing on concert and festival lighting. She primarily works on light design for contemporary performance, classical dance and opera.